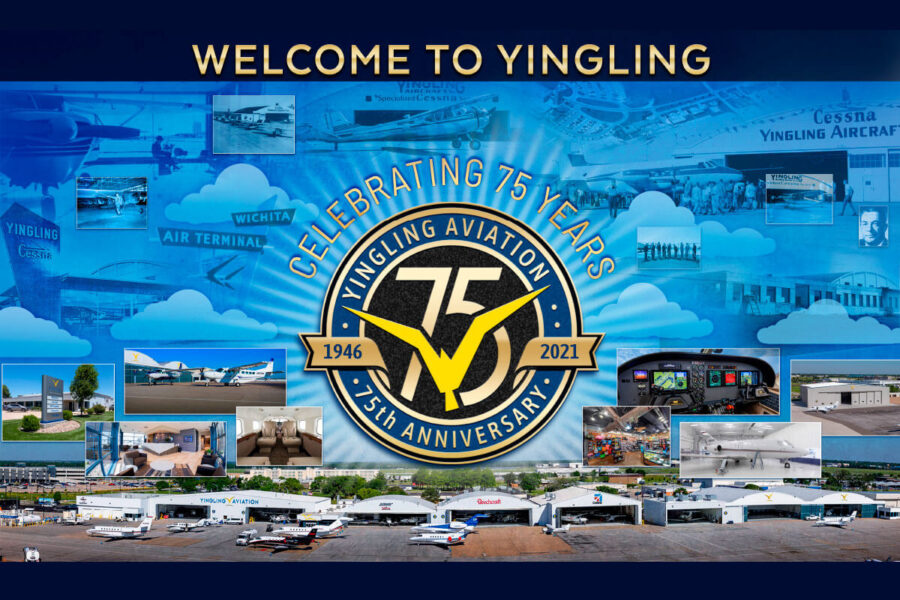 One of the nation’s leading FBOs and MROs, Yingling has added more than 50,000 square feet of hangar and office space at Wichita’s Dwight D. Eisenhower National Airport.

Yingling Aviation is marking its 75th anniversary in 2021 by further expanding its operations at Wichita’s Dwight D. Eisenhower National Airport. The company has added another 50,000 square feet of hangar and office space to the 200,000 square feet of facilities for its Maintenance, Repair, and Overhaul (MRO) business and Fixed Base Operation (FBO).  The firm acquired three additional hangars (#10, 11, and 12) adjacent to the east runway (01/19) and in close proximity to its existing space.

“Expanding our ongoing business and operations is a significant and appropriate way to celebrate 75 years in Wichita,” said Yingling President Andrew Nichols.  “The acquisition of these three hangars comes at an ideal time, not just from a historical perspective, but also a practical one. Our MRO support of the Citation and King Air models and our FBO activities continue to expand.  The addition of these properties will not only allow us to grow the services we offer, they make it possible for us to build lasting partnerships with an increasing number of aircraft owners and operators.  This is a win for Wichita, the aviation community, and our Textron Aviation customers,” he concluded.

Yingling is one of the original tenants on what is now known as Dwight D. Eisenhower National Airport, having moved its operations from Wichita Municipal Airport to Wichita Mid-continent Airport upon its opening in 1954.  Marking its 75th birthday in 2021, the company is celebrating a history of growth and success that parallels the development of general aviation in this country. Yingling has recorded a long list of “firsts” in the industry, beginning with being designated the very first Cessna Aircraft Company dealer in 1946.  The company’s long association with Cessna set the stage for its transformation and expansion over seven and a half decades into one of the nation’s most expansive and inclusive maintenance, repair and overhaul, sales, service and parts facilities and fixed base operations.

Throughout most of its existence, Yingling Aviation has been a family affair—first with the Yinglings and, since 2000, the Nichols family.  Lynn Nichols, who currently serves as CEO, purchased the firm that year and led it until handing the reigns over to his son, Andrew in 2019.  “From my youth aviation was always important to me and to my family.  My dad was an executive with Cessna, and I grew up around airplanes and flying, so it was not surprising that I felt a strong inclination to acquire Yingling Aviation in 2000 when it became available,” explained Lynn Nichols.  “It has been a challenging and rewarding experience and one I wouldn’t change for the world.  It has given me the opportunity to meet, lead and grow close to our professional ‘family’ at Yingling and to share the experiences with my personal family, as well.  The past two decades have been gratifying and they’ve passed quickly.  Its success over 75 years is a tribute to all of the people who have been a part of the Yingling organization.  I have been pleased to be a part of its success.”

“Like my Dad, I grew up in aviation, as well,” added Andrew Nichols.  “To have the privilege to lead a group of outstanding, loyal and dedicated employees over the past couple of years is a dream come true.  I have learned from and grown close to this great group of employees and I’m looking forward to the next chapter in the ongoing Yingling.  Aviation story,” he said.

Lonnie Vaughan, who worked with Lynn Nichols in the office technology business and came with him to Yingling, served as President of the firm between Lynn and Andrew, reflected on the company’s history, as well.  “Yingling was already a mature operation when Lynn acquired it in 2000, but it had seen much of its tradition and business erode over a half century of existence.  With the help of a core group of experienced professionals, a creative and often unconventional approach, we were able to grow and expand the company and the services and products we offered.  It’s extremely gratifying to mark this important milestone and be able to look back on Yingling’s extraordinary history with pride and admiration for the team that made it happen.”

Yingling Aviation has been operated by three separate owners during its three quarters of a century.  Vic Yingling founded the company in 1946 and the Yingling family operated it until 1982, when Jerry Vanier, a Salina businessman, purchased it. On January 1, 2000, Lynn Nichols purchased the firm, electing to retain the familiar name.   In 2001 and 2002 he invested some much-needed capital in renovating the facilities, adding a new Completions hangar in 2005, as well. Under Lynn’s leadership, Yingling expanded its facilities and services dramatically, offering air charter services, aircraft modifications, aircraft interior completions, refurbishment, and repair, avionics installations and repairs, aircraft sales, expanded hangar capacity for locally-based and transient aircraft, and both piston and turbine engine fuel sales.

In 2014, the company purchased a 10,000 square-foot warehouse to support their growing propeller operations. Factory authorized by McCauley, MT, Sensenich, and FAA approved Hartzell Propeller facility offers a full range of services for its propeller customers.  Starting in 2018 thru 2020, Yingling began its largest multiple remodel and expansion projects since its company’s founding in 1946. In 2018, the first remodel project consisted of two new reception and lobby areas that support the FBO and customer areas. In 2019, the company completed a new 23,000 square-foot facility for expanded jet and turbine MRO services.

Yingling’s avionics department has grown into a recognized leader for innovation and quality among general aviation installers and systems integrators.  It is an authorized service location for most major avionics manufacturers including Collins Aerospace, Garmin, Avidyne, Honeywell (Bendix-King) and Go-Go and offers major and minor avionics upgrades, repairs and panel reconfigurations as well as cabin connectivity and comprehensive cabin management system installations.

Yingling is a Beechcraft, Cessna and McCauley Propeller Authorized Service Center supporting the full Textron line of jet, turboprop and piston aircraft.  It also one of the premier independent Textron parts suppliers with distribution world-wide.   It provides comprehensive support to new and legacy Textron aircraft, offering the experience and expertise of top-notch factory and FlightSafety trained technicians, proximity to both the Cessna and Beechcraft factories, and relationships with many local vendors. Providing avionics, interiors and paint completions, and a variety of aircraft sales, aircraft management, maintenance services, and propeller services. Yingling Aviation can be reached by calling 316-943-3246.