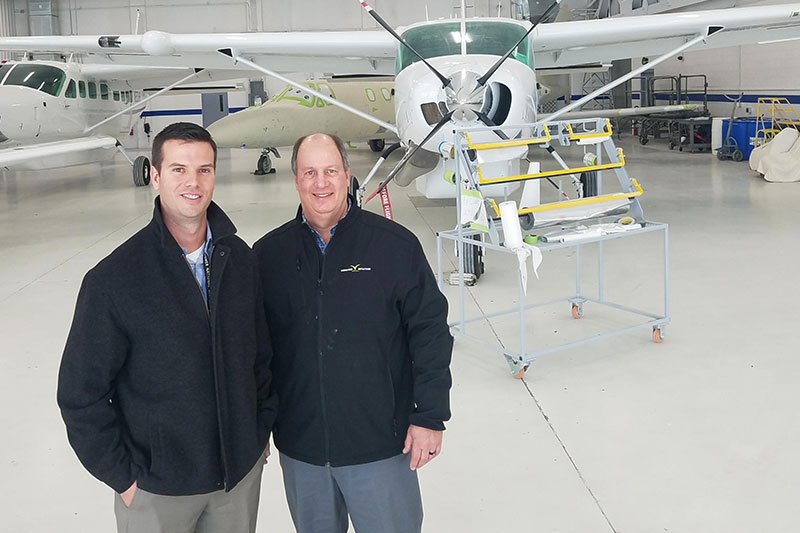 WICHITA—Yingling Aviation, a Wichita fixed base operator and maintenance, repair and overhaul provider, is in the final days of an expansion that includes a dedicated business jet maintenance hangar, paint support and interior completions facility and additional hangar and office space as it works to meet demand.

A hangar dedicated to strip and paint aircraft opened in June.

It is the largest facility, services and employee expansion in the company’s 74-year history and one that triples its square footage to more than 200,000 sq. ft.

It’s a significant investment in the future, officials say. Completion is expected in the next 30 to 45 days.

It also acquired the location once used by the Cessna Flying Club, which moved to the former Beechcraft facility in east Wichita. Yingling razed the facility and constructed 20,000 sq. ft. of new hangar space and 3,000 sq. ft. of office space. The expansion supports growth into the service of business jets, something it had previously performed on a smaller scale.

“We needed the new jet hangar because of the increase in our business and the increase in the size of the airplanes that we’re working on,” said Jerry Pickett, Yingling vice president of business development. “It made a huge difference.” It will now be able to accommodate all sizes of Textron Aircraft jets.

The additions also allows Yingling to strip and paint aircraft, a capability it was missing in the past. “We had paint booths but not a paint hangar,” said Andrew Nichols, Yingling’s new president.

Currently three Citation business jets are in the paint process. Paint services are sold out for the next three months.The additions make Yingling a “one-stop MRO shop,” Pickett said.

Yingling has long been known as an FBO, but that accounts for only 10% to 15% of its business, Nichols said. “The rest of our business is from the MRO side.”

The business was founded by Vic Yingling, an Army Air Corps captain and son of a Wichita car dealer. Lynn Nichols, Yingling chairman and CEO, purchased the business in 2000 from then-owner Jerry Vanier and began expanding hangar and maintenance space, refreshing its interior and adding a Subway Café and Mama DeLuca’s restaurant. It also added Aviator’s Attic, with pilot-related products.

In September, Lynn Nichols promoted his son, Andrew, from chief financial officer to president, the “next logical step” in the company’s generational succession plan, Lynn Nichols said Andrew Nichols began working for his dad as a janitor at Yingling at age 14. Now a licensed pilot, he holds degrees in finance and business management. He began working at Yingling full-time in 2009 after serving in the finance department of Cessna Aircraft.

In the next few years, as business continues to expand, the company may look outside Wichita to grow.

“This is our home,” Nichols said. “We’ve got good momentum here. We don’t want to lose sight of that. But I think it would be silly not to look outside Wichita.”